Every November, a handful of Fairbanks writers pull long work sessions to complete the National Novel Writing Month challenge of 50,000 words in 30 days. These writers talk about turning off the internal editor to pull this off, but what does that mean? Fairbanks NaNoWriMo Writers present their very rough drafts, including some funny, endearing, and honest notes that got them to their goal.

India Brinkerhoff, who has been here in Alaska for less than five years, grew up in the Rocky Mountain area of Utah. She has been an avid reader and writer as well as an adventurer.  A stint in the Coast Guard, a lifetime in the Society of Creative Anachronism (SCA), and her personal instinct as a reader have brought her to where she is now, a novice writer in Alaska’s Interior area. She now lives in North Pole, and says she is “home.” 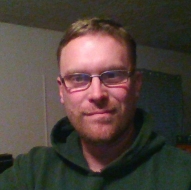 Joshua Brooke says, “Art is my life and my stories are like my children.” Joshua enjoys working outdoors and being inspired by nature and the people he meets. He works at a feed store and absolutely loves all things plants and flowers and things that grow to sustain and nurture. He believes that every person has a story. You just need to be patient and open yourself to the endless possibilities.

Joshua Carman loves the outdoors! He finds his inspiration in nature and the process it goes through creating all the beauty that we see around us. Kayaking, fishing, hiking, camping, are some of the things he likes to do when he is outdoors. He also loves music: he writes, plays, produces, and writes his own material and listens to all kinds of music, where he finds inspiration when combining emotion with his writing. He lives with his wife and a 7-month-old German shepard puppy in North Pole. He has participated in the national writing contest for just about three years now and is putting together some ideas on a new story!

Ivan Kvapil has been a writer ever since someone told him “write about whatever you want.” Focusing mainly on High Fantasy stories, Ivan has dabbled in all forms of fiction and focuses his creativity into creating new worlds in which his characters can explore. Ivan first started NaNoWriMo in High School, and even though he has never managed to write 50,000 words in a month, he has never let that stop him from trying. Ivan has a small selection of published poetry and during middle school won the Statewide poetry contest in his age division. Ivan’s passion is to someday become a full-time novelist and not only finally finish a book, but publish it in hopes that other people will get as much enjoyment reading it as he got writing.

Rachael Kvapil entered into the science-fiction world with an Atari and a Commodore 64 that she programmed to show fish blowing bubbles on her TV. After getting a degree in journalism, Rachael started publishing science-related poetry in between writing her first science fiction novel. As a child, Rachael was considered an odd girl for her love of science fiction, but that hasn’t stopped her from completing 7 NaNoWriMo challenges in 8 years.

Roger Topp has lived here in the boreal forest for 24 years. He is a national champion fencer and prize-winning slam poet. By day, he directs museum exhibitions, and his writing has appeared in museum exhibits and films and in the journals Anomaly, Coachella, ZYZZYVA, and The Maine Review. He can be found online at thewellandthewicked.com.