Join Fairbanks Arts for the 2018 Literary Reading Series featuring the English Graduate Organization from the University of Alaska Fairbanks. Master of Fine Arts students Alex Alfaro, Brianna Frentzko, Jason Namey, Kendalyn Mckisick and Sarah Small will be sharing excerpts of their work. The MFA Creative Writing Program at UAF is a rigorous three-year residence combining an intensive focus in fiction, poetry, creative nonfiction and dramatic writing with an in-depth study of literature.

Alex Alfaro The year was 1989. The place, Ogden, Utah. The timing, immaculate. He would be born to immigrant parents living a scattershot life along the Wasatch front. Guatemala. Chile. Wyndom. Morgan. Layton. Fairbanks. Place does not define who you are so much as how you see the rest of the world. Alex Alfaro’s life has always seemed varied, almost random, and that’s how he likes to keep it. He will tell you that having clear defined goals in life is like spoiling the ending of a movie or blowing the punchline of a joke.  From such randomness does he find purpose in the world: from absurdity comes destiny, from insignificance comes enlightenment and everything in between is a just a privilege–but art, he will tell you, is something like a life he’d like to live. 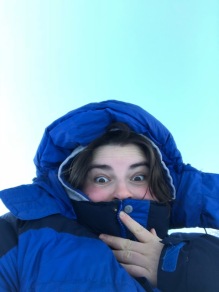 Brianna Frentzko spends a great deal of time contemplating the real possibility that she is living in someone else’s novel. Her three cats assure her this theory is unreasonable, but the suspicion lingers despite her best efforts. To reassure herself of her actuality, she writes her own novels and short stories. Her work has appeared in Bluestockings, WordsApart, The Crucible, and elsewhere.

Jason Namey is a third year MFA student at the University of Alaska Fairbanks. His short stories appear or are forthcoming in Puerto del Sol, Juked, Hobart, Moon City Review, and elsewhere. He is from Jacksonville, Florida.

Kendalyn Mckisick is from Little Rock, Arkansas where she received a BA in sculpture and a BA in creative writing. She will soon be receiving her MFA in poetry from UAF. She has previously worked as a chef and also writes essays sometimes.

Sarah Small is a third year MFA student at the University of Alaska, where she also serves as the Editor in Chief of Permafrost Magazine. She received her BA from Bucknell University, and has a short story in Cold Mountain Review.

Visit the UAF MFA website to learn more about the creative writing program.