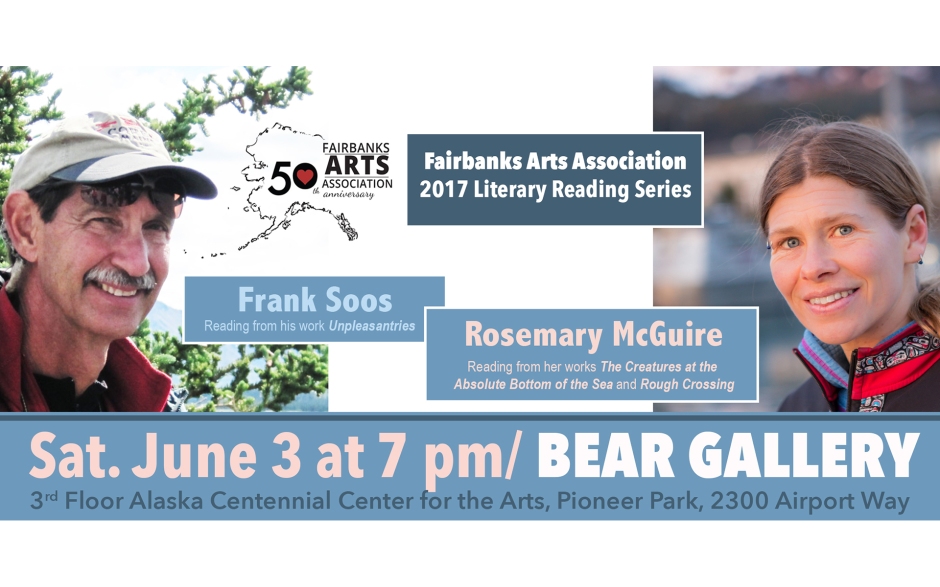 Fairbanks Arts Association is the proud host
of the oldest Literary Reading in Alaska.

Readings are usually held in the Bear Gallery the first Saturday of the month.

Out-going Alaska State Writer Frank Soos has published two volumes of short stories, Early Yet and Unified Field Theory as well as one collection of essays, Bamboo Fly Rod Suite. Unified Field Theory was awarded the Flannery O’Connor Award for Short Fiction. He is co-editor with Kes Woodward of the anthology Under Northern Lights: Writers and Artists View the Alaskan Landscape. A collaborative work, Double Moon: Constructions and Conversations, combines his mini-essays with the work of his wife the artist Margo Klass. His book of essays, Unpleasantries, was released in summer of 2016 by the University of Washington Press.

Rosemary McGuire is a life-long Alaskan, who was for many years a commercial fisherman. She now works in the Arctic and Antarctic as a research technician. Her collection of short stories The Creatures at the Absolute Bottom of the Sea was published by the University of Alaska Press in 2015. Her coming-of-age memoir, Rough Crossing, won the River Teeth Nonfiction Book Prize in 2016, and was published in March 2017 by the University of New Mexico Press.